Under Bill C-20, the Canada Emergency Wage Subsidy program (CEWS) is extended until November 21st 2020. This new bill will result in considerable changes to how the program operates, affecting the entitlement of employers from periods beginning on or after July 5th. Bill C-20 also includes some retroactive changes for eligibility periods, addressing some challenges faced by employers for backdated claims.

The CEWS program is intended by the government to incentivize Eligible Employers to continue paying Eligible Employees—including those on paid leave or with reduced hours—and to rehire employees previously made redundant.

The initial period was from March 15th to June 6th 2020. The federal government then extended the program by 12 weeks, till August 29th. The latest revision, Bill C-20, extends the program till November 21st, which may be increased further still until December 31st 2020.

The federal government has changed the subsidy calculations for periods starting on or after July 5th. To qualify for a 75% subsidy, Eligible Employers no longer need to sustain a bright-line revenue decline of 30%. Now, Eligible Employers with any revenue decline in the new qualifying periods can be subsidized for an amount proportional to the percentage of the decline.

Alongside this, there are now ‘top-up subsidies’ available for employers with a revenue decline of 50% or more. Distinctions will be made between active and paid-leave employees. Wage subsidy calculations for periods ending before July 5th remain the same.

The program extensions and new subsidy calculations are the most significant updates. However, further amendments to CEWS under Bill C-20 include:

Aside from these changes, the people who are eligible to benefit from CEWS and the associated revenue calculations remain largely the same.

How Does the New Subsidy Calculation Work?

The biggest change to the CEWS program is how the subsidies are calculated on or after July 5, 2020. The original program (for qualifying periods from March 15 to July 4) provided a bright-line test. Eligible Employers experiencing a revenue decline of at least 30% for any qualifying period (or 15% for period 1, from March 15 to April 11) qualified for a wage subsidy of 75% of the wages paid to an Eligible Employee for a week in that period (up to $847 per week). Without demonstrating the required bright-line revenue decline, Eligible Employers would usually not be entitled to any subsidy.

From July 5th, 30% bright-line revenue and 75% wage subsidies will be replaced by a two-part sliding-scale based on the revenue reduction experienced:

The base subsidy and top-up subsidy will use different measurements for the revenue decline. The larger the decline, the greater the subsidy, subject to a maximum amount.

What are the Safe Harbour Rules?

The new subsidy calculations include “safe-harbour” rules. These are in place for:

The safe harbour rules mean Eligible Employers can calculate their subsidy entitlement under the original bright-line rules as opposed to the new sliding scale. This applies where the employer would have received a larger subsidy under the original rules.

What Are The Rules for Employees on Leave Pay?

How have Restrictions on Eligible Employees Changed?

From July 5th, any individual employed in Canada for a qualifying period is now considered an Eligible Employee, and their employer can claim under CEWS. This means employers no longer need to identify whether employees received the Canada Emergency Response Benefit in the qualifying period. However, if employees returned to work during that period, they may still be liable to pay back funds.

How Much Will an Eligible Employer Receive Under the New Wage Subsidy Calculation?

From July 5th, Eligible Employers can now receive a percentage of eligible remunerations paid to Employees, as opposed to a set amount of 75% (in accordance with the aforementioned Safe Harbour Rules). The percentage is based on the revenue decline experienced by the employer. There are limits set on the non-arm’s length employees, but the amount received by the employer can be roughly calculated from the following formula:

The meanings of “eligible remuneration” and “qualifying revenue” remain the same as before Bill C-20. 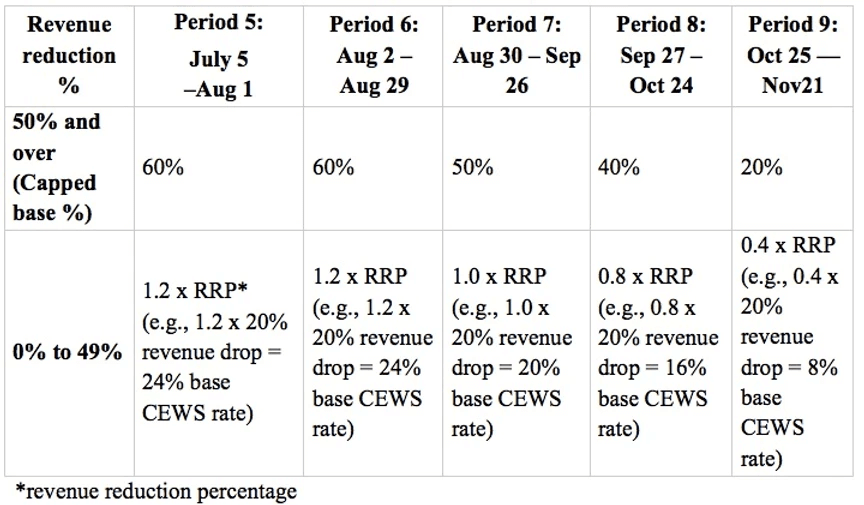 For each qualifying period, the top-up percentage is the lesser of 25% or the amount determined by the formula (but in no case less than 0):

What are the Comparison Periods for Base and Top-Up Subsidies? 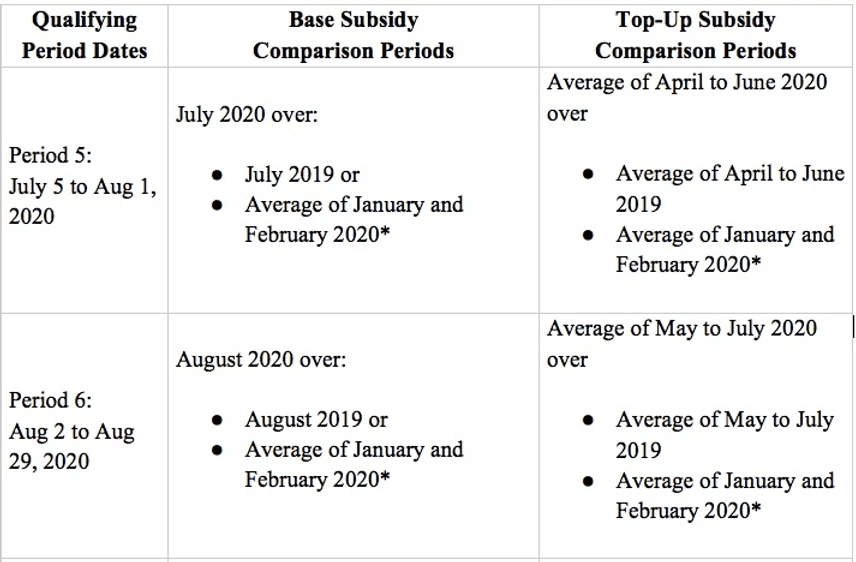 What is the Maximum Amount an Employer could Receive with new CEWS rules?

The maximum remunerations entitlement for an employer depends on the period being claimed for, because the base subsidy declines in each subsequent period from and after July 5th. If an Eligible Employer has a revenue reduction in the particular qualifying period of greater than 50% and has a three-month average revenue decline of over 70%, then the maximum per-employee weekly benefits are as follows:

How is CEWS Calculated for Non-arm’s Length Employees?

The amount of CEWS received for remunerations paid per-employee (who does not deal at arm’s length with the employer) is limited by the employee’s baseline remuneration. This is the average weekly eligible remuneration paid between January 1st 2020 – March 15th 2020. The alternative time periods are:

Whether an employee deals at arm’s length with the employer shouldn’t affect access to the base subsidy or top-up subsidy.

In addition to changes in calculating wage subsidies, The federal government has also brought in some retroactive changes that may mean employers who weren’t previously eligible are now able to receive CEWS. These, and other retroactive changes, are covered below.

What Are The New Rules For Amalgamations, Reorganizations and Purchases?

Previously, some employers weren’t eligible for CEWS because they couldn’t compare their 2020 revenue to their 2019 revenue. This created problems where combining existing businesses resulted in increased revenue in 2020 – for example, newly acquired businesses through asset purchase transactions, amalgamations, or subsidiaries. Thankfully, Bill C-20 will provide some solutions for these employers.

If two or more corporations are amalgamated to form a new corporation (or if a corporation is wound up into another), then they will be able to calculate benchmark revenue for the CEWS revenue decline test using the combined revenue of all predecessor corporations. This rule was previously introduced as draft legislation on May 15, but was not passed by Parliament at that time.

There are also new rules for purchasing assets. If an employer gains assets that form all or most of a business in Canada by a seller (and made the required election), then they can determine the qualifying revenue by including the previous reference period revenue percentage of the seller. The Eligible Employer will be required to file a prescribed election form for each qualifying period for which it seeks to file on this basis, and the seller must jointly elect with the eligible entity if the seller is in existence during the qualifying period.

Previously, employer’s needed a CRA registered payroll account to make remittances for employee remuneration. This requirement stymied certain employers who use a payroll provider to fulfil this obligation.

Now, entities without a CRA payroll account can also be included, provided their payroll service provider is registered, and makes the remittances for employees.

How will Notices of Determination be Issued and Handled?

Bill C-20 also clarifies how the CRA can issue notices of determination for CEWS wage subsidy payments. It was previously announced that applications might be audited and subject to compliance obligations, although the protocol for CRA reassessments and contested decisions was unclear.

It is now possible for ministers to issue a notice for determining or changing the amount of wage subsidy a taxpayer receives. Objections will be handled by the existing objections and appeals procedures under the Income Tax Act. It’s important that taxpayers keep detailed accounts to support any CEWS claims, otherwise, they risk coming under an arduous auditing process.

Who Else Is Now Included As An Eligible Employee?

The changes also mean that previously excluded entities can now be considered Eligible, including Indigenous government-owned corporations that are carrying on a business and their subsidiaries, national-level registered Canadian amateur athletic associations that are tax-exempt under paragraph 149(1)(g) of the Income Tax Act, registered journalism organizations that are tax-exempt under paragraph 149(1)(h) of the Income Tax Act, and non-public educational and training institutions.

However, the federal government has also narrowed the definition of the eligible entity to exclude trusts that are exempt from Part I tax or are public institutions.

These changes apply retroactively to all qualifying periods.

Can Revenue Decline Be Calculated with Accrual or Cash Accounting?

How Has CEWS Changed For Extended Leaves and Seasonal Workers?

The amount of wage subsidy that can be claimed per employee is limited by several factors, including the particular employee’s “baseline remuneration.” The original CEWS rules excluded employees who may not have worked between January 1–March 2020, as this was the period that baseline remunerations were based on. Bill C-20 allows alternative periods to be used for the remunerations calculations:

The deadline to file a CEWS application is now January 31, 2021.

Although not a part of Bill C-20, the federal government reserves the right to publish the names of all CEWS recipients and has indicated the intention to soon make these lists public.

The Canadian Revenue Agency (CRA) received an extra $304.1 million in the federal budget for 2021 to assist it in combating tax avoidance and active

Taxation Of Digital Services Under The GST/HST Subjected To Requirements: Non-Resident Businesses

Non-resident businesses and Canadian and foreign platform operators will be subject to new GST/HST reporting regulations beginning July 1, 2021. GST/HST is typically applied to